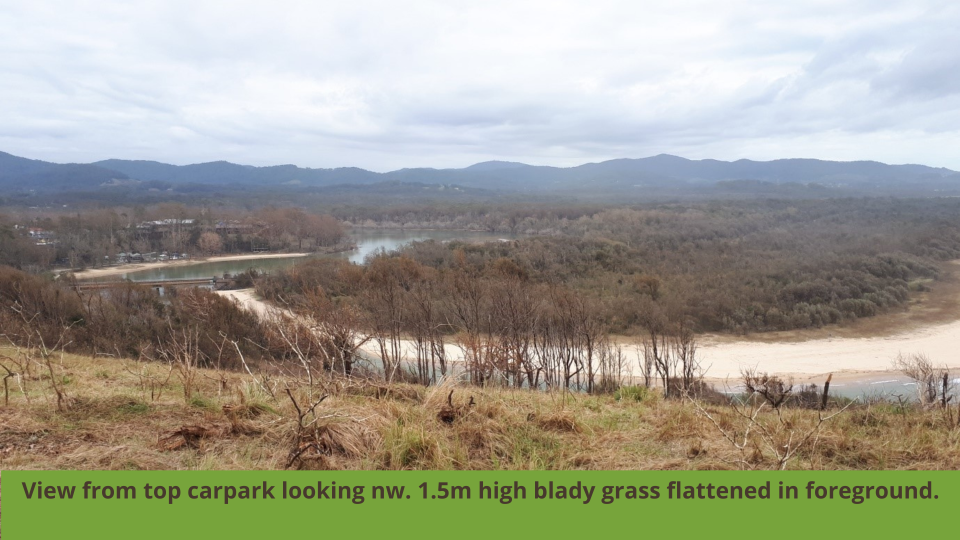 While we know there is a chance of hail storms in late spring, no-one anticipated the degree of devastation unleashed around 2pm on Wednesday the 20th October 2021.  Massive quantities of golf ball size hail backed by tornado like winds came up from the south west and tore through the heart of Bayldon and Toormina, the northern half of Sawtell, and across Murray’s Beach and Boambee Headland before arcing back into North Boambee and Coffs Harbour.

While the initial focus was on asset damage and clean up, the obvious and immediate impact on the local flora and fauna was evident everywhere, with reports of dead and injured wildlife and vast quantities of vegetation debris strewn across the landscape.

The spectacle from the walking paths on Boambee Headland after the event was likened to that of a European winter or post catastrophic fires, although instead of smoke there was ice still sitting in the shaded gullies two days after.

A closer inspection revealed the impact force from the hail had not only stripped leaves but also bark, with soft foliage totally shredded and some limbs bare of an important protective layer.  The shear force from the high winds had also wreaked devastation on the exposed vine thickets and brushbox forest on the Southern flank. The normally heavily shaded remnant rainforest as well as the littoral forest along the back of Murrays beach were weirdly open and full of light with a number of branches and vines being brought down and undergrowth flattened.

Many of the shallow rooted banksias on the exposed slopes had also either been smashed or flattened and the tall grasses which provide shelter for bandicoots, small birds and other ground dwelling fauna likewise. Of course little escaped, and the ever present lantana and senna had also been stripped bare and laid low.

Murray’s Beach was likened to an ‘ice field’ immediately after the storm and the exposed coastal wattle along the fore-dunes was stripped bare of foliage.

Members of Sawtell Dunecare made a reconnaissance tour of the headland on the Sunday following the event.  We used rakes and shovels to clear away debris from the walking path and where we could, cleared fallen limbs and trees which had fallen across the track. A lot of the time we just stood in awe and wonder at nature’s terrible destructive force sharing our shock with passers-by. 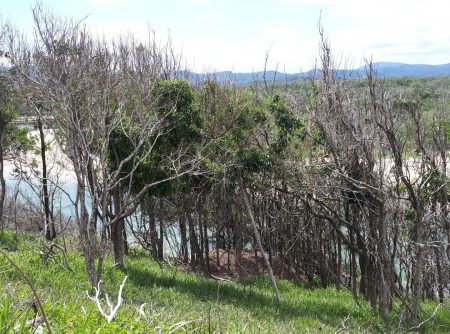 Initial concerns were what short term impacts might be.  Lack of cover meant any surviving small animals were vulnerable to predators with the headland a hotspot for osprey and kites. Even the resident wallabies had lost their usual hiding spots, although the coastal corridor fortunately permits them to travel south to unaffected areas.  A lone brush turkey was one of the first visible inhabitants, continuing to guard its exposed nest under the bare sheoak trees. 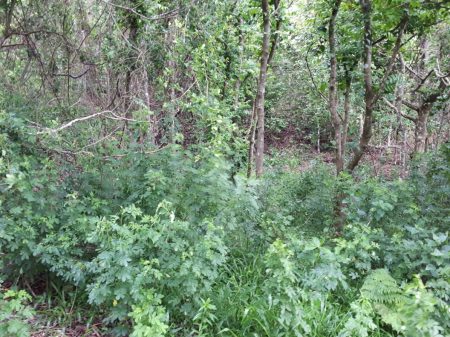 Senna infestation on the edge of the remnant rainforest

A strategy for moving forward has very much been dependent on which early emergent weeds we would tackle. Of course lantana and Easter cassia/ senna showed early on that they would take advantage of the opportunities the extra light allowed.  We took advantage of the fact that with very little foliage and now open undergrowth we were able to access areas previously too difficult.  Our early working bees prior to our summer break targeted lantana east of the top carpark, with a weed blitz on Sunday 28th November providing extra and much appreciated weight to our efforts.  The Council Bush Regen team also managed to progress their mixed native planting program adjacent to the bottom car park prior to Xmas.

One rare positive of the destruction was that we managed to locate the old rainforest walking trail which descends from the top car park.  Last surveyed back in the early 90s, we were also able to confirm a number of its original inhabitants were still alive and well. Young ferns responded early with a sickle fern (Pellaea falcate) being identified for the first time. 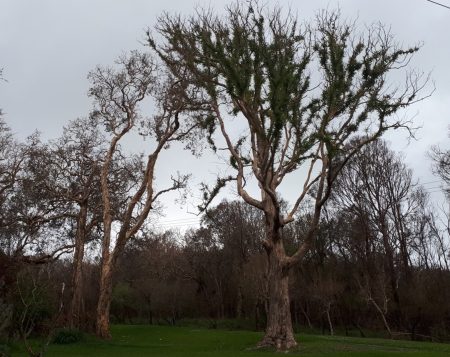 Swamp box (Lophostemon suaveolens) stripped bare for a couple of months then reshot within days as did the old red gums (E. tereticornis) on Sawtell Road

Within two months the bulk of the canopy and forest trees had re-foliated.  Many of the big eucalypts showed epicormic growth similar to a response post fire. While standing bare for several weeks, some went from totally bare to gaining a green fuzz in a matter of days. The exposed and softly clad red bean trees (Dysoxylon mollissimum) which had been totally stripped bare have taken a bit longer to recover but are now mostly flourishing. Some newbies have appeared in large numbers – native cucumber vine (Diplocyclos palmatus) being one, appearing in places it has not been seen before. 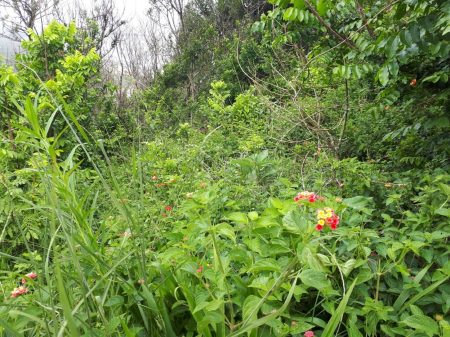 While it has also been an opportunity for the small native seedlings to flourish, they have had little chance. With the extra good rainfall we have had over this summer it’s now weed central, with senna, crofton,  billy goat, broad leaved papsalum, ragweed and all the usual suspect vines competing for space.  At least the small fauna has some ground cover.

Thankfully, the Kangaroo grass (Themeda australis) and small unique patch of protected Floyd’s grass (Alexfloydia repens) appear to be largely unaffected, while the tough blady grass, sedges and lomandras are recovering from being flattened. Of course there are plenty of other invasive grass varieties adding to the weed mix although the broad leaved paspalum will be an obvious target for the spray contractors. 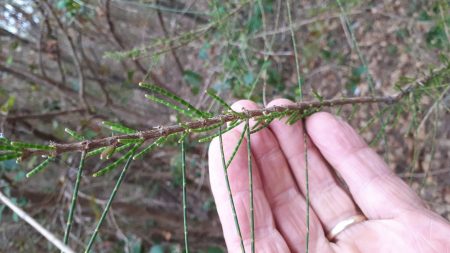 While it appears that the bulk of the tree cover on the southern slopes have recovered,  there is still a concern with the stands of sheoaks (A. glauca and A. littoralis) on the northern face which provided deep cover and generally kept weeds at bay.  While they have regained new leaf growth there is still a lot of extra light penetrating the once dark stands. We are hopeful the dense ground cover of sheoak needles will continue to suppress any significant opportunistic weed growth. 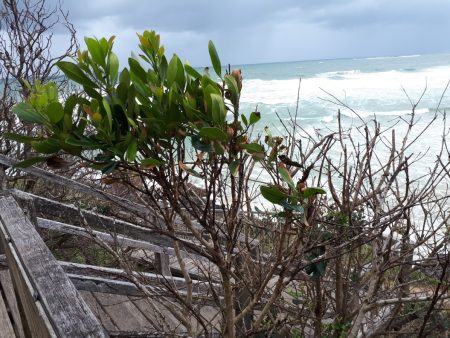 Whatever happens, one thing is certain; Sawtell Dunecare have a challenge ahead of them with no shortage of work, or variety of sites and tasks.  Fortunately, we have many new members, some who have only responded recently to this latest devastation right on their doorstep. 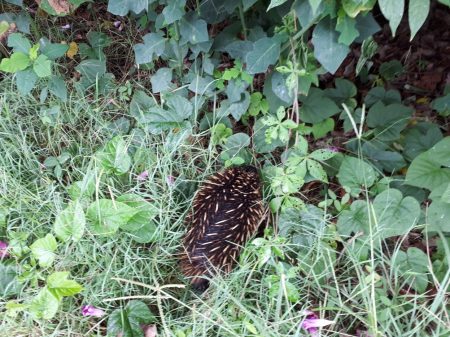 . Life returns …along with the ever-present ‘mile a minute’!

We also look forward to an invigorated re-planting program with a continued focus on re-establishing the northern sheoak forests which had been gradually dying back prior to this event.  Recovery and management of the wide ranging biodiversity and extending the habitat for the local population of black glossy cockatoo are also priorities.

We will keep you posted – Dave Wood