The Common Myna, Acridotheres tristis (previously known as Indian Myna) was introduced to Australia from south east Asia about 150 years ago and has taken hold in many areas, sadly at the expense of many local native birds. Common Mynas like to live around suburbs with open grasslands, and often feed on leftover pet food.

Why is the Common Myna a problem?

Managing the number of Common Mynas by trapping

Coffs Harbour Regional Landcare have volunteer trappers who place special traps around homes and farms to trap Common Mynas and remove them humanely. These traps use dry pet food to attract the Mynas. Traps are usually left in place for around four weeks before they are moved to a different site. Trapped birds are removed periodically by volunteer trappers. The volunteer trapper will assist you through the process. You only need to ensure the attractant food (small pellets of a supplied dried cat food) and water, is available in the cage – to both attract Myna birds and to treat them humanely in the taller roosting cage until your local Myna trapper comes to collect trapped birds. In the very rare event that another bird, like a native Noisy Miner (which is a honeyeater and not fond of cat food), is attracted into the cage your local Myna trapper will come around to free the native bird immediately. 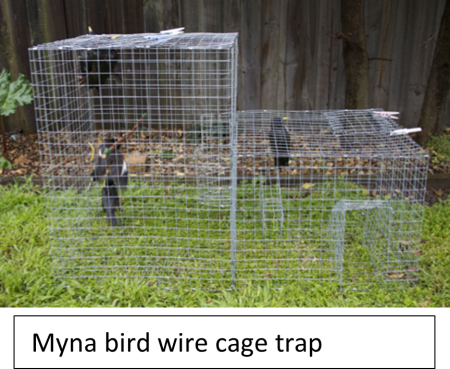 Everyone can help by:

The Common Myna is frequently confused with the native Noisy Miner

If you can host a trap, it is important to first distinguish the difference bewteen the pest species and the native Myna.

The feral Common Myna has a brown body and black head. In flight it has distinctive white patches under its wings. It is an opportunistic feeder living off insects, compost scraps, pet food and more!

The native Noisy Miner (related to the Bell Miner or bellbird) is a member of the honeyeater family and searches for nectar in the flowers. Both birds act communally to drive other birds away, and while the Noisy Miner can be annoying in large numbers it is not a feral pest.

What can you do?

We are after residents who are willing to host the placement of a small wire cage trap (see photo) on their property to assist us trap these pest birds. The trap needs to be in a quiet place, in a yard away from any dogs. Ideally where Mynas have been observed landing in a yard to search for food. The trap is well proven to be effective in attracting Mynas.

If you are able to host a trap, fill in the form below with your details. One of our volunteer Myna trappers will then be in touch with you when they have a trap available. The Common Myna is frequently confused with the native Noisy Myna. It is important to correctly identify the pest species. Please read the above differences between the species and check on the form below that you have correct identification of the pest species.

This form captures your contact details, bird numbers and certifies that you have correct species identification.