Our Local Aboriginal Land Council owns a number of bushland properties and the ‘Repair to Country’ team is the only mechanism by which they can manage those lands. Most of these lands have not been looked after for a very long time and the Land Council doesn’t have the funding or expertise to develop management plans or implement identified management actions.

We supported the development of management plans through a project with the Northern Rivers CMA and then gained funding from North Coast LLS to implement the management actions within the budget of the program. The team identified two properties owned by the Land Council at Mylestom in the Bellingen Shire as their preferred sites under this Program and a workplan was developed for these as well as a public reserve at Mylestom where the newly formed  Landcare Group  required some professional  support. 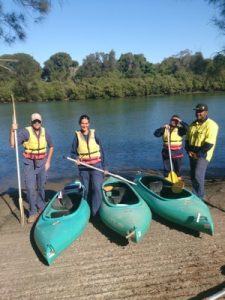 The team carried out bush regeneration over 15 ha of coastal bushland including three Endangered Ecological Communities (Littoral Rainforest, Lowland Subtropical Rainforest and Swamp Sclerophyll Forest). They used canoes to access Tuckers Island in the Bellinger River with their tools and equipment and they established excellent relationships with the local landcarers.

The team now has boundary markers in place for the first time which show the four corners of their land which is adjacent to Bongil Bongil National Park at Mylestom. A training exercise in fox and dog control with NPWS pest manager Brad Nesbitt also encouraged them to closely engage with their land. 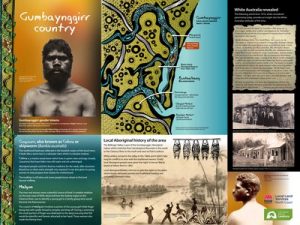 An interpretive sign about local aboriginal history was developed in consultation with local aboriginal people and the sign was installed at the public reserve at Mylestom. Local stories were told during a gathering at the reserve.

The greatest achievement in this project was the cross-fertilisation between local government areas, black and white communities, land tenures and Landcare networks.

This is just the beginning of hands-on ‘Engagement with Country’ for many local aboriginal people and the team of young bush regenerators is a small group. Coffs Harbour Regional Landcare is well placed to continue that engagement in the future as we have built good relationships over the past years.